Taken from www.guardian.co.uk
“Contortionist hid in luggage before stealing from other bags on Girona-Barcelona coach” 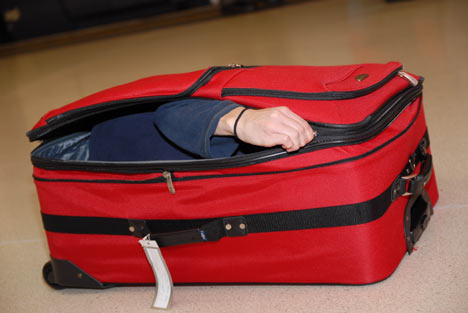 A man has been arrested in Spain after curling up inside a large suitcase that was placed in an airport bus cargo bay and sneaking out to steal from other people’s luggage. A police official in the north-eastern Catalonia region said on Thursday that the man arrested last week was very thin.

Also arrested was an accomplice who placed the contortionist thief inside the cargo hold of a bus running from Girona airport to Barcelona, boarded the bus and then retrieved him at the end of the line. During the 60-mile (100km) ride, the thief would slip out of the suitcase and use a sharp object to pick locks or open zips to steal from bags. Police were alerted by bus passengers who reported items stolen from their baggage.

Verb Hide – Hid – Hidden = Conceal from sight, prevent from being seen or discovered: “Where did he hide her money?”

TODAY is your last chance to get FREE registration for your #EnglishSummer in Barcelona! 🇬🇧☀️

Prepositions of Time – English Lesson with Examples and Video

Taken from www.guardian.co.uk “Contortionist hid in luggage before stealing from other bags on Girona-Barcelona coach” A man has been arrested in Spain after curling..." />